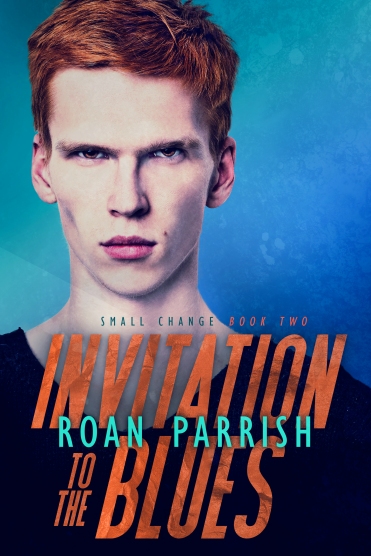 Invitation to the Blues by Roan Parrish

Blurb: Eight months ago Jude Lucen fled his partner, his career, and a hospital in Boston after a suicide attempt. Now back in Philadelphia, he feels like a complete failure. Piano has always been his passion and his only escape. Without it, he has nothing. Well, nothing except a pathetic crush on the most gorgeous man he’s ever seen.

Faron Locklear came to Philly looking for a fresh start and has thrown himself into tattooing at Small Change. He’s only met Jude a few times, but something about the red-haired man with the haunted eyes calls to him. Faron is blown away by Jude’s talent. What he isn’t expecting is the electricity he feels the first time they kiss—and the way Jude’s needs in bed speak directly to his own deepest desires.

Jude and Faron fall fast and hard, but Jude has spent a lifetime learning that he can’t be what the people he loves need. So when the opportunity arises to renew his career in Boston, he thinks he has to choose: music, or Faron? Only by taking a huge risk—and finally believing he’s worthy of love just as he is—can he have the chance for both.

Invitation to the Blues is both heart-wrenching and gloriously heartwarming. In some ways this was a hard book to read because my experience with depression so closely echoed Jude’s, that there were times when I had to put it down. I spent a lot of time in tears in my eyes, wishing I could wrap Jude in the warmest blanket and all the love.

That said, Jude’s mental illness was handled really well, as some one who has experienced this myself I can be wary of books dealing with the topic. But Roan handles it with such compassion that there were definitely some tears of healing shed.

Invitation to the Blues was such a wonderful book and so well written. It’s without a doubt Roan’s best work to date. This may not be an easy read but goddamn it was in an exquisite one.

My full review will be in its way as soon as I can find the words to describe this book and how much it meant to me.

And on that note keep reading for an excerpt of this stunning book and a chance to win 2 previous ebooks by Roan!

My problem with Faron was that he was stunning.
He was tall and taut, with broad shoulders and an elegant neck. His tawny brown skin was flawless and he had dreamy, gray-brown eyes that always seemed to focus on something in a plane beyond this one. His riot of corkscrew curls was sometimes loose, but today was caught up in a topknot. It had been bleached nearly white when I first met him and was now growing out. His cheekbones were high and broad, casting shadows that made him look like he was candlelit from every angle. His mouth was lush and full, and his rare smiles turned his chiselled beauty to a warmth so engaging that you didn’t ever want him to look away from you.
His beauty was a problem because it made me want him and I hated wanting anything. Desire was the beginning of disappointment.
It wasn’t just his looks, though. I could’ve handled that. I’d known a lot of beautiful people.
No, it was everything.
He was graceful and forceful at the same time. His focus was intense, whether it was on the things that only he saw or on whoever he was listening to. And he made me feel calm—as if he held the whole world in his hands and slowed it down or sped it up to whatever speed I was going.
It was intoxicating: a promise of peace as long as I was in his presence.
A hope.
And hope was even worse than desire.

Enter to win 2 e-copies of any back catalog book by Roan Parrish:

Direct link to the Rafflecopter Giveaway!

Find Invitation to the Blues

Roan Parrish lives in Philadelphia, where she is gradually attempting to write love stories in every genre.
When not writing, she can usually be found cutting her friends’ hair, meandering through whatever city she’s in while listening to torch songs and melodic death metal, or cooking overly elaborate meals. She loves bonfires, winter beaches, minor chord harmonies, and self-tattooing. One time she may or may not have baked a six-layer chocolate cake and then thrown it out the window in a fit of pique.