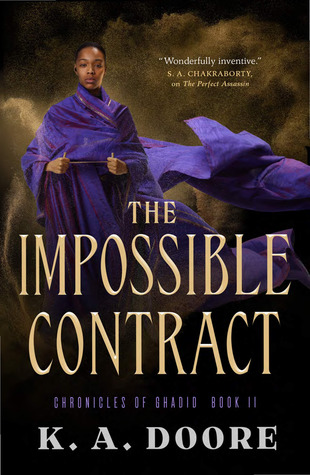 The Impossible Contract by KA Doore

Blurb: Thana has a huge reputation to live up to as daughter of the Serpent, who rules over Ghadid’s secret clan of assassins. Opportunity to prove herself arrives when Thana accepts her first contract on Heru, a dangerous foreign diplomat with the ability to bind a person’s soul under his control.

She may be in over her head, especially when Heru is targeted by a rival sorcerer who sends hordes of the undead to attack them both. When Heru flees, Thana has no choice than to pursue him across the sands to the Empire that intends to capture Ghadid inside its iron grip.

A stranger in a strange city, Thana’s only ally is Mo, a healer who may be too noble for her own good. Meanwhile, otherworldly and political dangers lurk around every corner, and even more sinister plans are uncovered which could lead to worldwide devastation. Can Thana rise to the challenge—even if it means facing off against an ancient evil?

The second instalment in the Chronicles of Ghadid, The Impossible Contract is a fantastic blend of magic, adventure and undead camels. Thana, having grown up as the daughter of the Serpent of Ghadid, is determined to carve out her own legacy. So when she is offered a contract to kill Heru, a en-marabi to the Empress, she takes the contract despite knowing the danger involved. After all Heru’s work is blasphemous and his crimes must be punished but as Thana’s contract leads her further from home than she’s every been, she finds there might be something much more sinister than one en-marabi.

“She was Thana Basbowen and she was more than just the Serpent’s daughter.”

I loved The Perfect Assassin and The Impossible Contract is just as brilliant. Doore has crafted an incredible world in the form of Ghadid. The setting rises from the page and engulfs you until it leaves you longing to visit the city that sours high above the sands. The Impossible Contract expands the world beyond on Ghadid, we are taken on a journey to the seat of the Empire’s power and to the desolation of the wastes. Just like Ghadid these places are brought to life by Doore’s incredible world-building and skill.

The three main characters are an absolute delight to watch. From assassin, target and exasperated healer to reluctant allies and more as the book progresses, there’s no end to the shenanigans and danger Thana, Mo and Heru find themselves in. I’ll be honest, Heru annoyed me at first. He’s something of an arrogant ass, who’s not exactly concerned with the opinions of others but he grows on you until you’re fondly shaking your head at his antics.

I loved watching Thana and Mo’s relationship unfold. The yearning was on point. Mo had her own perceptions on the assassins as a healer and Thana hid that part of her for most of the time they were together. I liked that although it did create tension, it wasn’t overblown for dramas sake. They both had things to work through, they did and they came together and even in the tense moments it never felt doomed.

There was a brief moment in the middle of the book that I felt like the pacing dropped a little and I was worried that maybe I wasn’t going to like this as much as I did The Perfect Assassin but it picked up and the last third was intense and gripping leaving you flying through the pages desperate to know what happens.

Something I love about these books is that whilst there is murder and high stakes and evil undead, there’s something cosy about them. They feel like coming home. They’re soft. This is probably an odd way to describe books about assassins but it’s the only way I can think of to describe them – soul-nourishing content.

Both The Perfect Assassin and The Impossible Contract (and book three) should be on your tbr. Queer assassins, undead camels, truly unique world-building and characters you can’t help but love!

Find my four and a half star review of The Perfect Assassin here: X

“It isn’t murder. If anything, it’s the exact opposite. I’m giving them immortality.”

*I received an eARC via Netgalley from the publisher in exchange for an honest review. All thoughts and opinions are my own*

One thought on “Book Review ‘The Impossible Contract’ ~ K.A. Doore”